skip to main | skip to sidebar

.: Consequence of stubborness..... yet awesomeness! :.

Went to CK's house on the 13th day of CNY when he was having an open house party.. It was basically a home arcade centre --- Living room is a big Nintendo Wii wonderland and dry kitchen has become a PS2 xtreme land. And there was a setup bar serving some awesome drinks- different kinds. Made full use of his house. =P

So I was drowning in the xtreme land as the Dance Party is in the house. Did 118 combo ( an entire song!) Yes.. very cool.. And hmmm, a bit of pain at the ankles. No worry! Oh wow next song, here I go! After few hours later, I guess I'd burnt much calorie for a day, perspired and tired so I finally take a longer break. With more alcohol down the stomach! Only then I realized hey everyone seemed to go home already. My ankles, didn't feel right. But I was too tired to even care... Left the arcade centre 10 past 8.

Soon after that, heard that KL marathon is coming. I didnt participate last year so this year I wanted to do something "great". Half marathon is really something great for me -- cause I've never taken a serious one in my life. Very excitingly I gotten my new New Balance running shoes! 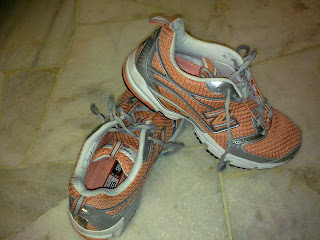 Very nice! very good in running. Alot of room @ the front part, you can play piano with your toes inside while wearing them (imagining?). So I began my morning jog just around my neighborhood. The only drawback I have is the smokes from cars and school buses - unless I get up REALLY early, say like 6am and start running? But most of the time I only kicked myself out of bed near 6:30am --- that's when I REALLY want to jog.

And, my ankles did feel abit not right. But I thought it's small matter, so, shrugged and keep jogging. Felt nice after a morning jog - So refresh! Didnt care much on the little torn feeling at my ankles, still. So, I went to driving range, did long-hour shopping in heels, jog, etc. And never really care to take a serious look at my ankles.

Not long after that, just past weekend, I've gotten my dance shoes!!! 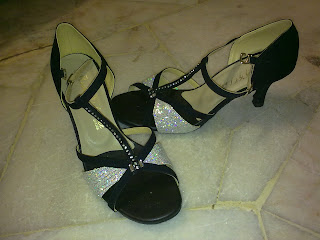 Aren't they pretty? Without wearing them I'm already imagining I dance like pro. Hmm, sexy. Give it a right turn, and a left! And back break! Mambo ....... and yes I attended the 6th class of Beginner Class. Pretty much a dancer already (I see you roll your eyes ....:P ) . Abbie warned me not to attend the class when I mentioned to her about my ankles. CK wanted to fetch me to seek medication. "I couldnt afford to miss a class!" So, stoned head went and made her fabulous turns and steppings. Felt good after class, didnt feel right on the left ankle. We still visited CK at his house, had a slice of his out of oven banana walnut cake..... Yummy... :) Forgot about the pain, I played hoolla hoop at night!

So this morning when I got down from my bed, I couldnt step fully on my left ankle. "Oh shit.." Already knew what Abbie & CK would say so I'll just wore my armor and carried my shield to let them hammer me with their sarcastic tongues. CK still brought me to seek medication during lunch hour.... like a guard he asked more questions than me.

"Rest about 2 weeks ya?"
"Can I er... wear heels for erm, 2 -3 hours, you know, wedding dinner's coming"
"Er.... well I supposed okay.... " Didnt hear what he said after that. "If can, better avoid doing so"
"Can she, you know, attend to her dancing class?"
"Huh? Dancing class? Ballroom dance is it? Well er... well you caaaaaaaaaannnnn" There I didnt hear what he said after that..

"but better don't." CK heard that.
"Anything she can't eat?"
"I'll give you a list later, dont worry". Si fu is very busy rubbing my left ankle, and keeping his eyes at my face, reading my facial expression as if he's not rubbing hard enough. (felt like crying already)

"Aww it's not that bad! I maybe already recover on Friday!" For once, something that I have passion on, and now somebody tells me I cant do it! Like a kid I bargain.

But.. well, that's what happened when you didnt seek treatment early enough. But no regrets at all because the 6th class was JUST TOO AWESOME!!! 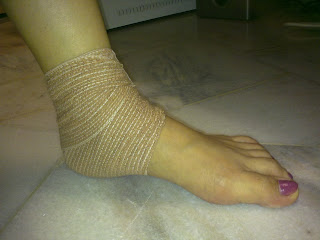 Jae
Simple & Ordinary. Always remind myself to appreciate & treasure everything I have.